Epiphany is a celebration of the arrival of wise men, also called magi, from the East who brought gifts to Baby Jesus.

The word “Epiphany” means an appearance or manifestation, especially of a divine being.

For many Christians, Epiphany marks the end of the Christmas season. Epiphany is on January 6, after the 12 days of Christmas.

Epiphany is also called Three Kings Day. While tradition holds that 3 kings came to visit Baby Jesus in the stable (and the kings are even given the names of Melchior, Caspar, and Balthazar), the truth is probably quite different.

The wise men brought 3 gifts to Jesus which has led to the assumption that there were only 3 wise men, but in reality it was probably a larger group. (See below for the full Biblical account of the visit of the wise men.)

Another false assumption, made more popular by nativity sets everywhere, is that the wise men came to the stable the night Jesus was born. In reality, the visit of the wise men most likely occurred later, at least 40 days after Jesus’ birth and possibly up to 2 years later. These men were traveling 800-900 miles to see Jesus, a long distance for that period of time. Likely the visit occurred 6 months to a year after Jesus’ birth.

The term “magi” gives us information about the wise men. The Greek word used here refers to scholars likely from Persia in the specific priestly caste of Zoroastrianism. These scholars were astrologers, so it makes sense that they would have seen the miracle of the star above the place where Jesus was born.

Today we refer to this as the Star of Bethlehem. On the night Jesus was born, a bright star shone above where Jesus was located.

These men were not technically “kings” as we often refer to them. They were priests and scholars.

The gifts brought by the wise men were expensive and significant gifts, and they bowed down and worshiped Jesus.

How Do You Celebrate Epiphany?

Epiphany is celebrated throughout the world in a variety of ways.

In the Christian church in America, traditional churches honor Epiphany on January 6 and then as a season of the church year throughout the weeks until Lent begins.

One simple yet meaningful way to honor Epiphany in your home is to keep your Christmas decorations up until this day, which is the end to the Christmas season.

Epiphany is celebrated throughout the world in a variety of ways. Epiphany, or Three Kings Day, is especially commemmorated in Spanish and Latin cultures.

A friend of ours introduced us to the tradition of a Three Kings Cake. Made on Epiphany, the cake has a small plastic baby baked into the cake. The person who finds the baby in their piece of cake is then the person to bake the cake, or tamales, the following year. (In other traditions, Kings Cake is made at Mardi Gras.) 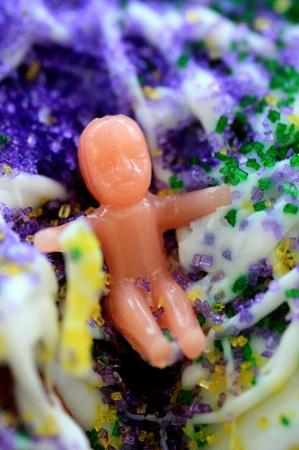 The baby inside a King’s Cake. Photo: Wikipedia, public domain

Check out this link with more information about how Epiphany is celebrated in other parts of the world.