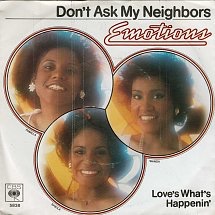 Rejoice is an album by American vocal group The Emotions issued in June 1977 by Columbia Records. The album reached No. 1 on the Billboard Top R&B Albums chart and No. 7 on the Billboard 200 chart. Rejoice has also been certified Platinum in the US by the RIAA. The album was produced by EWF […]

via Don’t Ask My Neighbor – The Emotions — AMERICA ON COFFEE