Shepherd’s Pie Or Cottage Pie?/ Find Out What Some Experts Have To Say

Shepherd’s Pie Or Cottage Pie?
What Do You Call It?
From Sarah:
Growing up in Southern Illinois (although still YANKEE Country)
our family called it Shepherd’s Pie. We fixed it with EITHER Beef or Lamb since we raised our own.
I don’t remember ever hearing it called Cottage Pie.
I’d never eaten Mutton either because our lamb was always from a young sheep. Mutton is from an older sheep
Since we had a garden and always had plenty of veggies we never made it with store bought vegetables.
Mom fixed it with onions, carrots, corn and sometimes peas. She probably added green beans a time or 2. It was one of those dishes you could use what you had.

All of this started because of a post I saw called Cottage Pie. I posted some of Chorizo and Thymes Recipes earlier. It was different than I usually made mine.
This I searched for more stories. 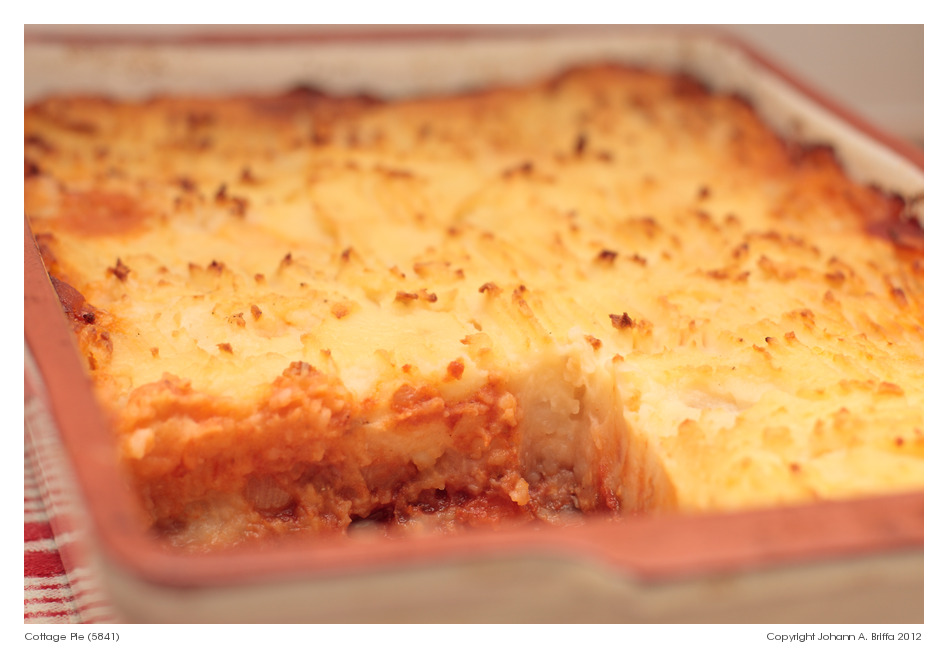 She uses bacon in hers.
Please check out Roberta’s Cottage Pie recipe. She mentions the difference between the 2 pies as well.

So that got me searching the history of the two.

The first article I ran across was this one by Jamie Oliver.

Now, there’s a headline you probably weren’t expecting to read – frankly, it’s not one we expected to write, either. However, tonight at 8pm, Jamie focuses on a magnificent shepherd’s pie in episode four of Comfort Food, and it got us thinking about the dish.

Being the epitome of simple, homely comfort, the idea that there may be “more to know” about shepherd’s pie is mildly amusing. I should have known better, however. No matter how ubiquitous or basic you think a dish is, if it’s been around in a country’s food culture for a long time, chances are it’s got a few stories to tell.

Here are the best of the ones I came across when looking into a dish many of us have been eating for comfort our entire lives:

Topped with rosemary-spiced creamy mash
“A classic shepherd’s pie recipe with beautiful lamb shoulder instead of mince – made for rainy days!

Next up:
A Bit More History

Cottage Pie Vs. Shepherd’s Pie: Is There A Difference?

As I was preparing to write up how I make Shepherd’s Pie, my innate curiosity about the history of the dish got the better of me and I ended up spending a good 3 hours doing research.  If you know me, you know I adore all things of a historical nature and this subject happened to fit right in with my current historical romance novel work-in-progress (aka wip).  Okay, so apparently, there is a difference between Cottage and Shepherd’s Pie, but most people are using the names interchangeably.

British and/or Irish in origin, the term Cottage Pie came about long before Shepherd’s,1791 vs. 1870.  Centuries before these–in medieval times–pyes were made using a pastry crust with whatever ingredients one had on hand to make pockets that held minced meat and vegetables as a way to stretch out foodstuffs to feed more mouths.  I think this is ironic since I make my version for the very same reason.  It’s quick and easy, and definitely fills the bellies of my crew.

Read the rest of the story to find out the difference and what else Melissa has to say.

Cottage Pie vs. Shepherd’s Pie: Is There a Difference?

Shepherd’s Pie – and how I learned to Bloom

I want Christy’s Cookware and Dishes. Love the red and white. Oh Yeah.

This brown gravy mix is important so don’t try to substitute canned gravy or actual gravy, because this mix is going to act as a thickener for us and also lend a lot of great flavor to boot!

From Sarah:
Christy had a little different take on it that some of the others.
http://www.southernplate.com/2012/10/shepherds-pie-
and-learning-to-bloom.html

There is some confusion outside the UK between shepherds pie and cottage pie.
Basically shepherds look after sheep, hence a lamb or mutton pie is called a shepherds’ pie (but not shepherd’s pie if you want to be pedantic).
Dishes containing beef and sweetcorn are not shepherds pie, you could call them  “Pâté chinois“, a north American  variation consisting of layers of minced beef and sweet corn or creamed corn, topped with mashed potato in the same way as shepherds pie (said to have originated in Quebec from Chinese descendants of railway workers, but anything less like Chinese food is hard to imagine).
Any British beef and mashed potato pie is called a . The name “shepherds pie” does not appear to be old, first appearing in the 19th Century, although the dish itself must be much older. It may well be that the name cottage pie was used for all pies of this type before the term shepherds pie came into use. does not mention shepherds pie and refers to a cottage pie made from mutton. refers to a first known mention of Shepherds pie in 1885, discovered by . The  french equivalent is “”

Any British beef and mashed potato pie is called a cottage pie. The name “shepherds pie” does not appear to be old, first appearing in the 19th Century, although the dish itself must be much older. It may well be that the name cottage pie was used for all pies of this type before the term shepherds pie came into use. Dorothy Hartley does not mention shepherds pie and refers to a cottage pie made from mutton. Alan Davidson refers to a first known mention of Shepherds pie in 1885, discovered by Jane Grigson. The  french equivalent is “hachis Parmentier“

This one is different.
This mildly eclectic recipe calls on baked beans (US Boston beans) and curry powder to liven up this traditional English dish. Omit the beans and curry powder if you want authenticity.
It is not uncommon to mix cheese into the mashed potato.

Meet the crew of New City Fire Engine Company No. 1, and check out their take on shepherd’s pie. You’ll see a great trick for cutting an onion easily. Classic comfort food, shepherd’s pie is a delicious meat pie, starring seasoned ground beef and sautéed veggies baked with a fluffy mashed potato topping. See how they do it down at the station! Watch the video, then get a top-rated recipe for Shepherd’s Pie.

From Sarah:
I call it Shepherd’s Pie no matter what it has in it.
Cottage Pie just doesn’t sound the same.
What do you call it and how do you make it?
I would love it if you could ADD YOUR COMMENTS AND OR RECIPES LINKS in the comments. Or do a post of your own.
I would really like to know.
Love Sarah